We all like to think that we know what our audience wants, and by and large we may be right. But often, our audience responds to subtleties that they may not even be aware of. The truth is, what we find visually appealing and why is nigh on impossible to properly define. Small changes to the appearance or content of your social media posts can impact how likely your audience is to engage.

If you work in digital, you are no doubt already familiar with the value that A/B testing can bring. Website content and emails have long been popular subjects for testing, with publishers looking to tailor experiences as precisely as possible to the tastes of their audience.

A/B testing on Facebook is another brilliant and dynamic way to gain nuanced insights into how your audience interacts with content. Through a slight alteration of the tone of a share message, say, you can improve the performance of your posts substantially, and compounding these with other A/B tested optimizations, produce astonishing results.

Echobox Social is the only social media publishing tool with an organic Facebook A/B testing function natively included. With access to hundreds of thousands of test results from some of the largest publishers on the planet — all of whom use Echobox to intelligently automate and optimize their content distribution — our data science department has analyzed its fair share of A/B tests on Facebook posts and email newsletter content, and all of those hours have given them vital insights. So we decided to put together a how-to guide giving publishers a step-by-step account of how to A/B test on Facebook and get the very best results.

Packed with hints and tips, The Publisher’s Ultimate Guide to A/B Testing on Facebook is a one-stop shop for developing an A/B testing strategy that works. In this article, we’ll cover the highlights, but be sure to download the guide for complete details on how to A/B test on Facebook effectively.

A/B testing on Facebook offers you the chance to present content to your audience in the most appealing way. How do you know? Because, in effect, they’ll tell you.

To run A/B tests on Facebook, Echobox takes two slightly different versions of the same organic Facebook post and presents them to two distinct segments of your Facebook audience — version A to segment A, version B to segment B.

By comparing the performance of each version against the other, Echobox determines which version performs best with your specific audience. In less than 15 minutes, Echobox identifies the post version that generated the highest click-through rate, then automatically shares this winning variation with your entire Facebook audience.

Because it works! The performance boost to be gained by optimizing your Facebook posts in this way can be massive.

Just how massive? According to our research into average CTRs on organic Facebook posts, winning variations of A/B tested Facebook posts achieve an average CTR 32% higher than their non-tested peers. 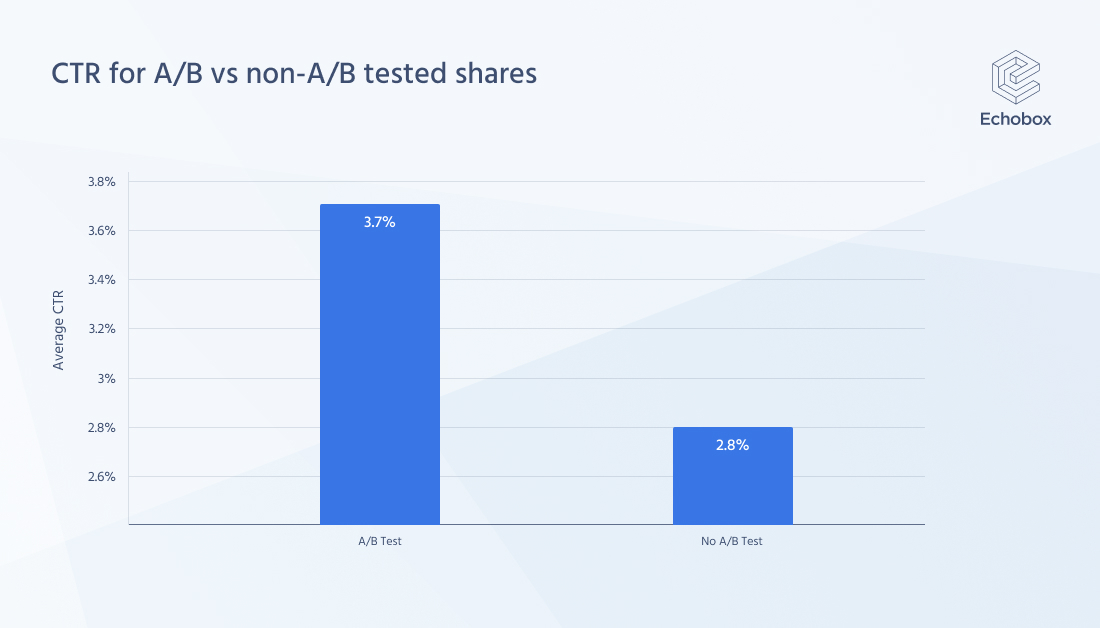 What sort of things can I A/B test in my Facebook posts?

Anything — the possibilities are almost literally endless. Our customers around the world have derived useful insights from all manner of experiments, some more general and some aligned more closely with the kind of content they produce. Below are a few examples (all posts are publicly available; no confidential information is shown).

While in this example, lifestyle publisher LifeSavvy used A/B testing to experiment with the effect of different share message lengths.

Download our guide for many more ideas on what to test

Is there a wrong or right way to A/B test on Facebook?

We’re often asked: what is the best way to conduct A/B testing on Facebook? Is there some particular strategy I should follow? The answer is that by laying out a methodical framework, you can gain amazing insights into audience behavior that will pay dividends for your Facebook performance. And that framework is really important. Too few tests, or too many variations, and you run the risk of producing results that aren’t statistically significant, or that are even downright misleading.

We recommend, for instance, that to produce results that you can be confident in, you should limit yourself to testing just one single element between variations, and that this variation should be tested no fewer than 30 different times. For example, if your hypothesis is that shorter share messages will generate more clicks on Facebook, we recommend you run 30 different tests, with one version of a post containing a long share message and one version with a shorter one. When it comes to A/B testing on Facebook, rigor and repetition are your friends.

All of this can seem rather complicated, with any number of dos and don’ts. That’s why our Ultimate Guide to A/B Testing on Facebook contains a simple testing framework and template, developed by our team of data scientists, that you can download and use to achieve the best possible results. 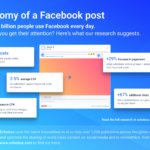 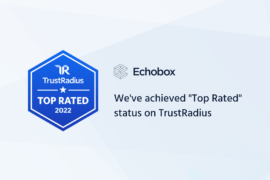