For the second year in a row, Echobox has been awarded Top Rated status by TrustRadius!

The Top Rated award is given based on a weighted average of customer reviews over the past year, with consideration given to categories such as Overall Likelihood to Recommend, Usability and Support. All of which is to say that Echobox has been recognized as one of the best social media management tools by our own users, with our aggregated score of 9 out of 10 putting us out in front of other platforms including Sprout Social, Hootsuite and Buffer.

Year on year, Echobox continues to innovate, adding new features and capabilities to make social media publishing simple and ensure that you can use Echobox as flexibly and efficiently as possible.

But there’s much more to come. Already in the last year, Echobox has released its latest product, Echobox Newsletters, adapting the groundbreaking technology used in Echobox Social to fully automate and automatically test and optimize email newsletters. And we have more, exciting plans for the future.

So, from us at Echobox, thanks to all of you who take the time to leave reviews. It helps us get better and better! And if you haven’t tried Echobox yet, what are you waiting for? 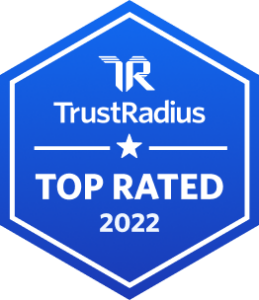 What our customers love about us:

Leading media outlets around the world use Echobox’s AI technology to improve performance and save time. Here are just a few of the reasons why Echobox is the world’s leading content distribution system for publishers across the globe:

Echobox performs a central role. For us it is one of the
business’ most important tools.

Sport1 saves 30 hours a week with Echobox
Sport1 is one of Germany’s leading free-to-air sports channels, broadcasting across Germany, Austria and Switzerland. Sport1 has developed a significant social media presence...

Sport1’s use of Echobox has been a huge success with big increases in social pageviews as well as massive time savings. In particular, the Sport1 team make good use of Echobox Scores, a rankings system that lets them quickly see which stories have the greatest potential to go viral. This means that they not only can share new content at the best time, but that they can also reshare content, getting the most from each and every post.

SCMP’s Facebook following in particular has grown 10x in the last 3.5 years, growing from about 400,000 to 4 million last month. Echobox has been a part of that journey, helping us post our content in the most optimal way. 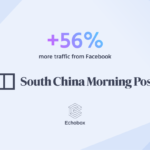 The South China Morning Post uses optimal timing to dramatic effect. Through its advanced AI and machine learning models, Echobox is constantly learning and adapting by analyzing first-party and publicly available data to find the best time to post. What’s more Echobox gives SCMP the flexibility to utilize AI while retaining control over posting times with its Time Slot feature. The SCMP team can designate a certain time frame to post and Echobox will find the best time within that window.

The biggest benefits of Echobox for us are the time savings, organization and streamlined workflows. Echobox enables us to be more responsive and productive because of the time saved. 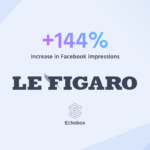 Le Figaro more than doubles Facebook impressions with Echobox
A pillar of the French media landscape, Le Figaro needed to streamline social media workflows and save its social media team time. Learn how...

For Marie Amélie Putallaz at Le Figaro, using Echobox means that posting across different platforms has been made easier than ever before with a streamlined and simple workflow. Using one centralized interface, the team at Le Figaro are able keep track of all of their content and edit and schedule it to post over all of their different Pages on Facebook, Twitter, LinkedIn and Instagram.