In order to improve publishers’ access to this important data, Echobox has developed the world’s first Social Media Index, showing how much traffic the online publishing industry receives from social media every single day. Using unique data from the Social Media Index, we show that:

1) Facebook is the dominant source of social media traffic

Facebook remains key to generating traffic from social media to online publishers and news websites. Last year, over 13% of news publishers’ traffic came from Facebook, an improvement from 2019’s 11%. For the summer, this figure rose to an average of around 13.7% of all traffic to news websites, meaning that nearly one in seven pageviews accrued by news publishers came from a single source.

Remarkably, Facebook’s traffic share was ten times higher than Twitter’s and accounted for around 90% of all social media traffic. The Social Media Index clearly shows this dominance: the vast grey area in the Social Media Index chart represents Facebook-generated traffic; Twitter is the sliver of red at the top.

Other social networks — LinkedIn, Reddit and Pinterest — hardly send any traffic to news publishers at all. Snapchat, on the other hand, generates so little traffic that we decided not to feature it at all in the Social Media Index.

At the end of last year, Echobox conducted a survey of publishers across different continents and multiple content verticals. Interestingly, many publishers (around 70%) have indicated that Instagram will be of increased importance to them in 2021. Yet the Social Media Index indicates that Instagram, as a percentage of referral traffic, is growing only incrementally after having dropped from its 2018-2019 peak when the wedding of Prince Harry and Meghan Markle produced an Instagram record of 0.65% of all traffic.

As we note in sections 3 and 4, the percentage of traffic coming from Facebook and Twitter has plateaued in recent years, with the early months of the global COVID-19 pandemic being a significant caveat. Accordingly, the greater focus on Instagram may be an indication that publishers see not only the potential for significant growth on platforms other than Facebook and Twitter, but also, beyond traffic, the ability to gain access to a younger demographic and build brand loyalty.

2) When it comes to generating social media traffic, weekends are the best for Facebook and Tuesdays for Twitter.

One trend that is easy to spot is that there are recurring spikes in Facebook’s traffic share that are as regular as clockwork. Whilst the best time to post on Facebook will vary with each publisher, week after week, Saturday and Sunday are the days on which Facebook referrals peak, with weekend traffic 6% higher than the weekly average. Twitter usage remains relatively stable throughout the week, but there is a discernible peak on Tuesdays and a trough on Sundays.

3 ) Aside from a steep rise during the height of the COVID-19 pandemic, Facebook has plateaued as a source of traffic since 2019.

The middle of 2018 saw the second lowest level of referral traffic from Facebook since the Social Media Index began collecting data in 2014, with July 2018 recording an astounding low of 7%. This steadily increased to a recent high of 16% on Christmas day 2019, but aside from another short lived peak in the summer of 2020, levels have plateaued at around 13% on average. 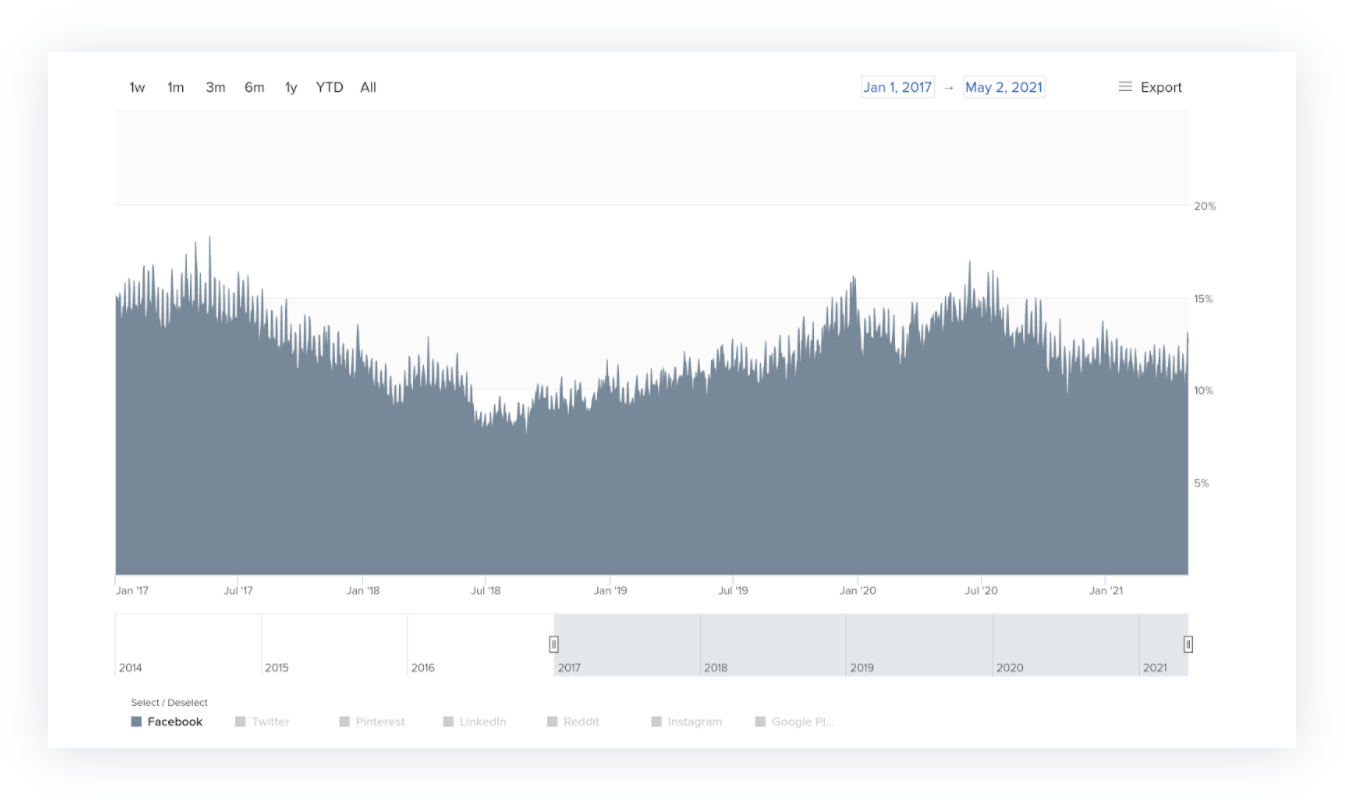 Twitter usage has tended to be more stable as a source of traffic, albeit at a far lower level than Facebook. Since the middle of 2015, Twitter has remained in a range between around 1.5% to 1%. This said, Twitter referrals have trended downwards since the second half of 2020 with an average of just 1.07% in December 2020. 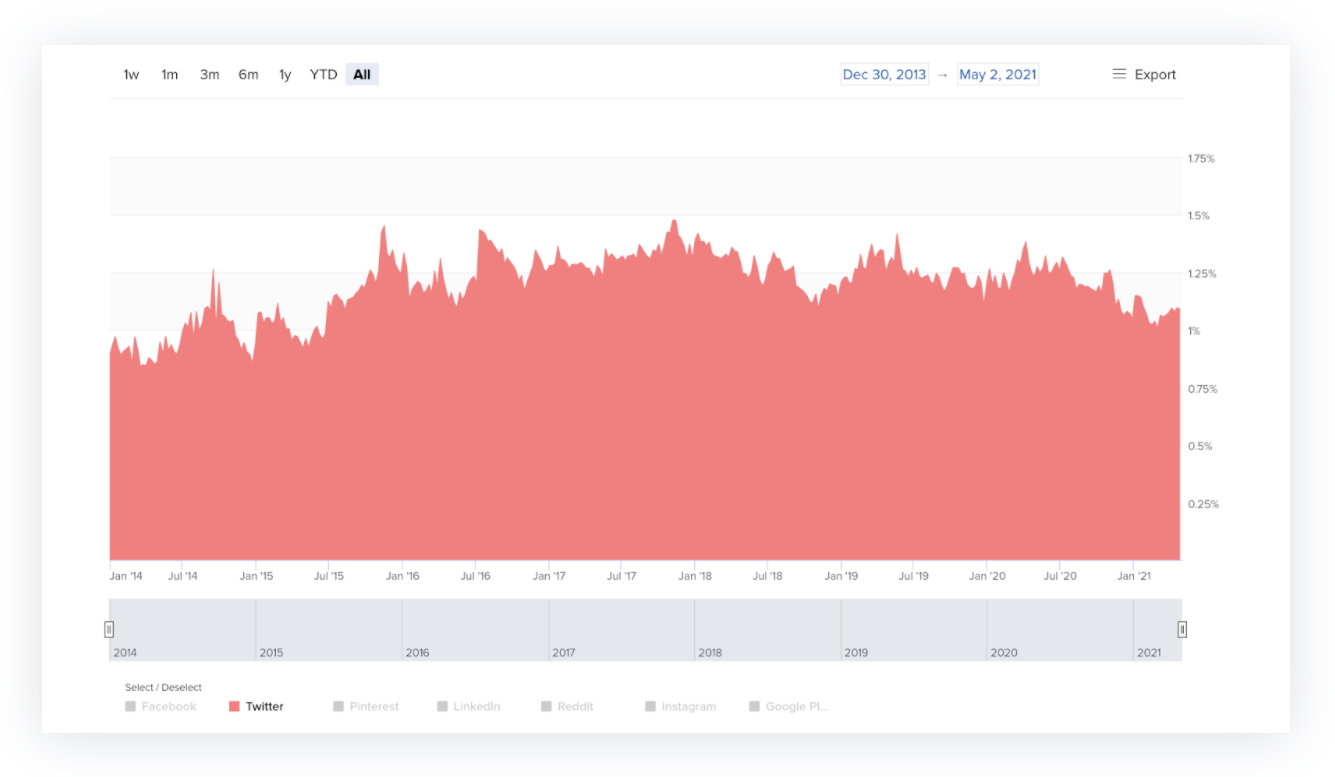 A similar decline in Facebook traffic can be discerned around the same time indicating that this may be a seasonal variation with less time spent on social media during the Christmas holidays and a concurrent slowdown in the newscycle. However, as previously mentioned, 2019’s peak day for Facebook referral traffic was December 25th.

The days following US election day in 2020 (November 4th to November 6th) were the worst days in the year for Facebook, in terms of its relative importance as a traffic source for news publishers. From a yearly average of 13.01% of all traffic to news sites, these 3 days produced a drop to an average of 9.58%. Twitter, by contrast, saw virtually no change against the yearly average, in fact, producing a small bump (1.25% against a yearly average of 1.22%).

The week of the election followed the general trend outlined earlier – peaks on the weekend, and a trough in the middle of the week. This time, though, the trough occurring the day after the election was deeper than usual, with November 4th Facebook’s worst day of the year as more people turned to other news sources and/or accessed news websites directly or through other channels. Twitter’s share in traffic was indistinguishable from a normal week.

This points towards a broader trend: When zooming in on days with particularly noteworthy events, such as major terrorist attacks or elections, you will often find that Facebook does not play an outsized role in generating traffic, perhaps surprisingly. Indeed the day of the US election in 2016 saw the lowest level of social media traffic from Facebook in that entire month.

The impact of the coronavirus pandemic has been sizeable for publishers around the globe. In 2020, Echobox collaborated on a study with the analytics company Chartbeat to gain an in-depth insight into the underlying trends during this unprecedented time. After a significant increase in social media traffic in March of 2020 and a short-lived spike 3 months later in June, the share of referral traffic produced by social media declined to around pre-pandemic levels – a trend which has continued into 2021.

One thing to note from this period is that of the publishers who saw an increase in their social media traffic, the use of artificial intelligence made a substantial impact on just how great this uplift was. Compared to those who used a manual approach, AI-driven social media publishing produced double the increase in social referral traffic. These results confirm previous findings about the advantages of utilising AI as part of a publisher’s social media strategy. Echobox’s cutting-edge technology allows publishers to optimise and automate their social media workflow in posting to Facebook, Twitter, LinkedIn and Instagram – the last of which, as we have noted, will be increasingly important for many in 2021.

However 2021’s social media trends develop, Echobox will be an indispensable tool.

Editor’s note: This is an update of an article originally published in April 2017. 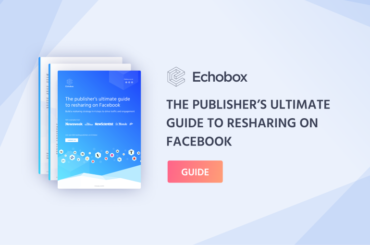 The publisher’s ultimate guide to resharing on Facebook
Ready to build an effective reposting strategy? We break it down into 4 steps and tell you everything you need to know. Get the free guide now!