Toward the tail end of 2020 we asked publishers across continents and content verticals to reflect on that momentous year and look forward to what the future may bring — what had been their biggest challenges? And what would their priorities be as the industry returned to a new normal? The resulting report, Publishers & Social Media: 2021 Trends, proved to offer a fascinating insight into the varied landscape of publishing in 2021. Unsurprisingly however, prominent in our respondents’ minds was social media traffic, with over 40% of publishers and media organisations reporting that growing followers and engagement would be a priority this year.

The pandemic has created a perfect storm in which government restrictions across the world have all but stopped print retail sales in their tracks, meaning that publishers have had to make substantial investments in digital without an important revenue stream. Even pre-pandemic, however, publishers have increasingly turned their focus to digital subscriptions. An increase in traffic to publishers’ websites coupled with a growing willingness on the part of readers to pay for their news has meant that subscription numbers for some publishers have surged in the past year. Against this backdrop, driving digital subscriptions was a key challenge in 2020, and this is set to continue into 2021.

Growing digital subscriptions, and doing so with fewer resources, were social media editors’ two most pressing challenges (both 46%) and this makes the third most reported challenge all the more important: staying ahead of Facebook algorithm changes. This can be difficult to do given the frequency with which Facebook tweaks its algorithms with sometimes major updates such as last year’s update to prioritise ‘original and quality news content’. Any truly comprehensive social media strategy, therefore, will rely on real-time data analysis that can detect changes and adapt accordingly. 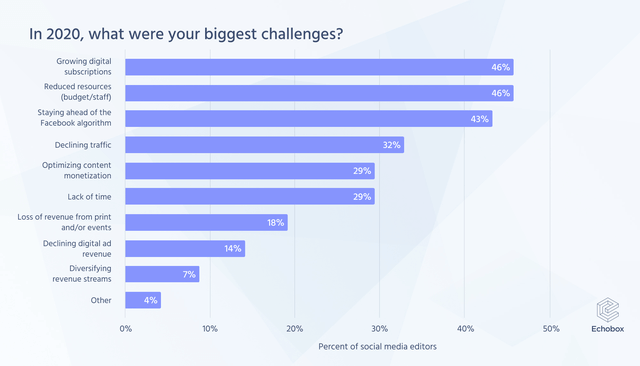 2) The priority: grow followers and engagement

As we mentioned above, growing followers and increasing engagement will play a significant part in driving digital subscriptions this year, and this goal carries even more weight for social media editors, of whom a whopping 71% cited it as a main priority. Even before the pandemic, publishers had begun turning their attention to refining engagement metrics, prioritising quality over quantity. 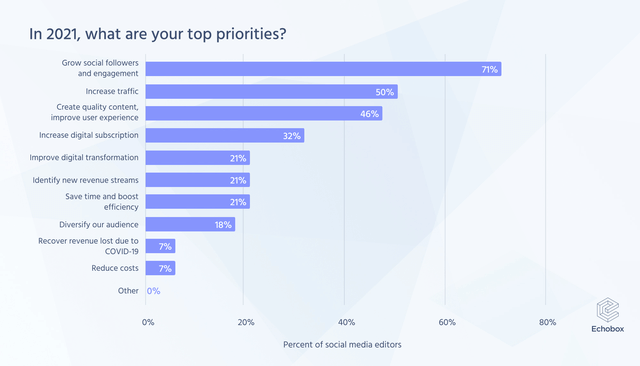 This shift has produced great value, changing the way in which many publishers think about producing content. Counterintuitively, perhaps, organisations such as The Guardian, The Times (UK), and Le Monde have even used data on engagement metrics to conclude that reducing the volume of articles they publish has the effect of increasing engagement.

For The Telegraph meanwhile, boosting audience engagement and subscription rates has involved enhancing their social sharing strategy with the help of artificial intelligence. By using automation to post content at optimal times as well as experimentation with A/B testing the paper has managed to increase engagement by 205% on Facebook, contributing to significant subscription growth.

But at the core of both maximising referral traffic and growing followers in a crowded digital space, is creating quality content and giving readers the most pleasurable user experience (46%). Across the industry publishers are devising a wealth of innovations to deliver content to audiences in novel and informative ways, from the BBC News Labs creating tools to convert text semi-autonomously into new digital formats, to the profusion of podcasts that have sprung up during the pandemic.

As we all know, though, carving out the requisite time to innovate is challenging enough without the demands of managing a robust and effective social media presence across various platforms. Many publishers have turned to AI to not simply automate sharing across social media, but to optimise it. For example, German free-to-air sports broadcaster Sport1 saves an astonishing 30 hours per week in social media management time, time which they can now put to use in developing their presence online and producing great new content.

Our survey indicated a strong degree of consensus with regard to the increased role Instagram will play in social media strategies for 2021, with 75% of social media editors indicating that it will be more important than last year.

This is a striking finding given that, as per our Social Media Index, Instagram makes up only a small percentage of all social media referral traffic to publishers’ websites, with a peak of 0.65% of all publisher pageviews in the 5 years that we have been tracking its performance. However, as noted in the Reuters Institute’s 2020 Digital News Report, Instagram’s use as a news source has doubled between 2018 and 2020 is poised to overtake Twitter in the coming years.

There are a number of reasons why, despite the lower levels of referral traffic generated, publishers are focusing more attention on Instagram. It could be, for example, that in search of relative competitive advantage, social media teams are looking beyond the relatively saturated Facebook and Twitter to develop a broader social strategy beyond driving traffic.

Instagram may also offer access to a younger audience where, according to Pew Research, 76% of people between the ages of 18 and 24 report using the platform. Whilst the volume of referral traffic it generates remains low, the fact that a large number of young people get news from Instagram (almost a quarter of 18-24 year-olds in the UK and US reported using Instagram as a news source for COVID-19 coverage) means that Instagram offers publishers the chance to build brand loyalty with a new audience segment.

To put these findings into context, the next highest-ranking platforms in terms of increased importance in the coming year were YouTube and Facebook with 53% and 46% respectively. 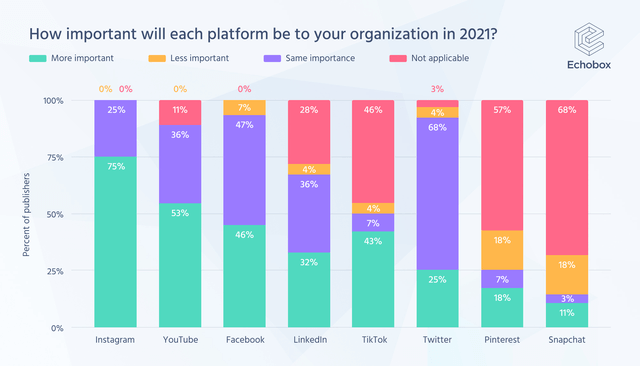 These are perhaps unsurprising findings given that, as indicated by the aforementioned Pew Research, in the US over 80% of people use YouTube and just under 70% use Facebook. Perhaps the most surprising result is that 4 out of 10 of social media editors indicate that Snapchat will feature more prominently as part of their social media strategy.

This leads us to our final observation.

Established digital channels will continue to be important for social media editors, but the search for growth means that publishers will have to branch out into relatively new social media platforms. When asked which types of activities would become more important to their organisation in 2021, both on social media and beyond, finding new audiences was the most commonly cited activity by 60% of social media editors, no doubt explaining the strong presence of Instagram and TikTok in the preceding section. The pandemic may have changed much, but ultimately the search for greater market share remains a prime goal. 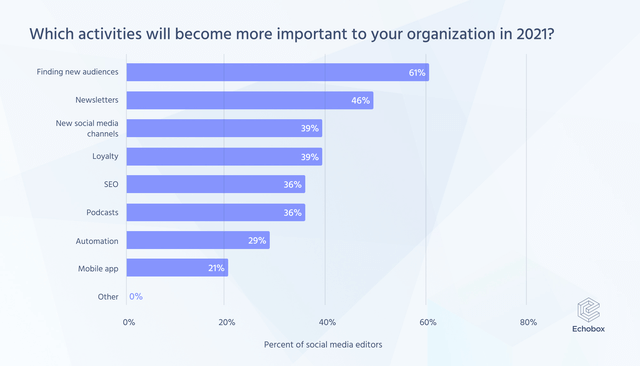 Another notable insight from our survey was that nearly half (46%) saw newsletters as a key activity for 2021, and while it is certainly not a new trend, the sizeable number for whom it remains a priority indicates that the industry still feels there to be significant growth potential. The relevance of newsletters in today’s digital landscape is fairly simple: they give publishers direct access to readers’ inboxes, provide a great opportunity for the tailoring of content to specific interests, and remain fundamentally unmediated by social media companies.

The New York Times capitalised on the international interest in US politics with a UK-targeted ‘midterms’ newsletter in 2018. They also noticed a positive correlation between the likelihood of a reader becoming a paying customer after signing up to a free newsletter.

Publishers are using newsletters, podcasts and other formats to build certain reader habits and create a sustaining base of loyal readers; fostering this loyalty was the third most important reported activity (39%). Much like engagement metrics, loyalty can be measured in multiple different ways, but as long ago as 2018, publishers like NBC had made creating a loyal viewership its number one goal, with a view to scaling sustainably. As increasing subscriptions becomes more and more fundamental to publishers’ revenue streams, strategies aimed at fostering loyalty will be a key activity for a long time to come.

How did these findings stack up with your priorities in the coming year? To maximise your social media strategy, take a look at Echobox Resources which contains a broad range of white papers, case studies and blog posts to help publishers boost referral traffic and engagement on social media. Want to discover Echobox for yourself? Our state-of-the-art AI technology saves you time whilst increasing social media performance, giving you more time to create the great, innovative content that will drive growth in 2021. 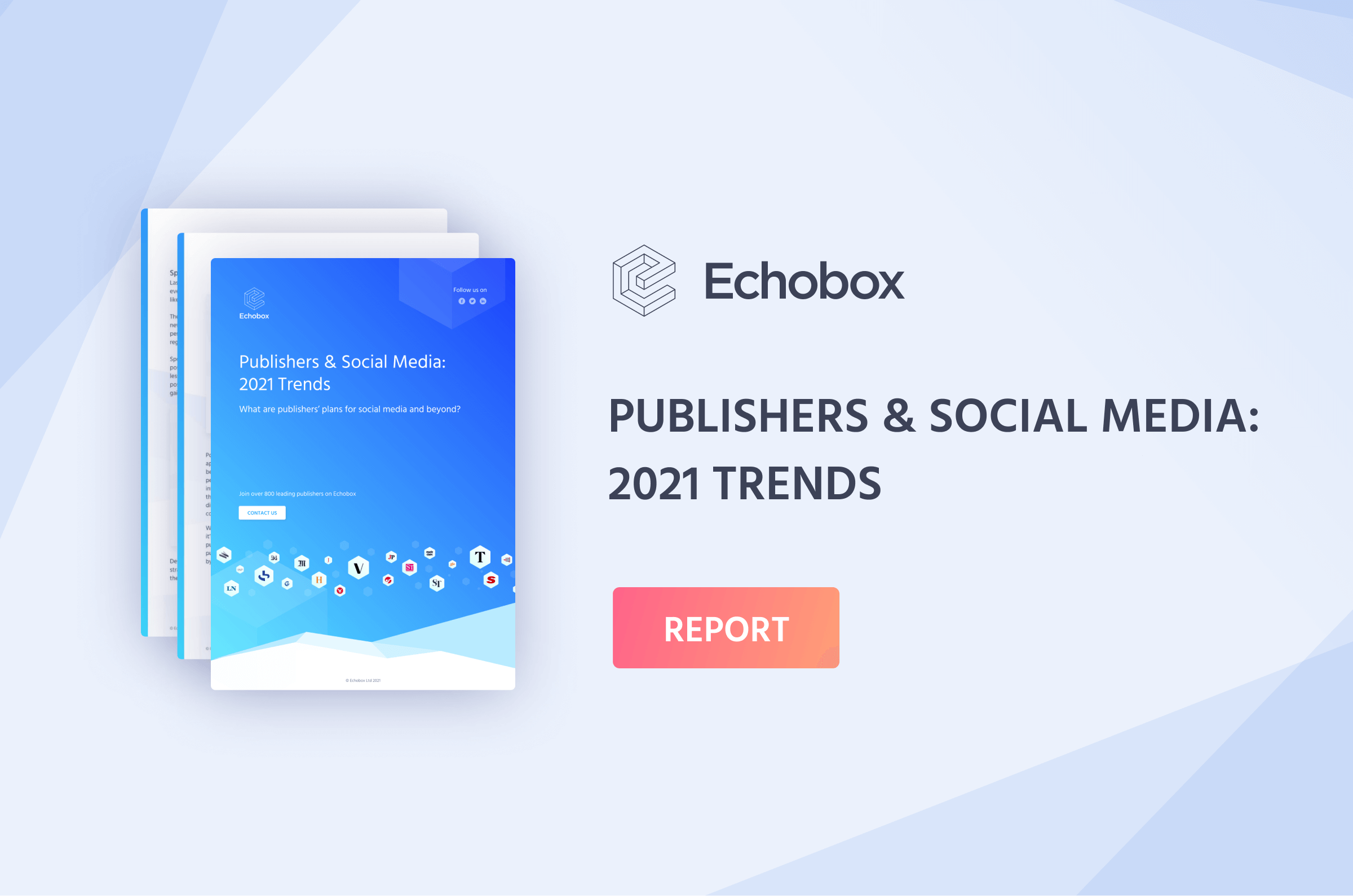 Publishers & Social Media: 2021 Trends
What are publishers’ plans this year for social media and beyond?We surveyed a global pool of publishers and media organizations…
NewslettersSocial Media
1