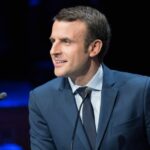 Why Macron will win
This Sunday, millions of French people will head to their local polling stations to choose their next resident… 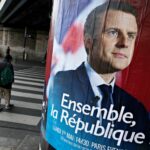 We used big data to predict Macron would win. Here is what we learned in the process
When the voting booths closed in France last Sunday, perhaps the most surprising result was that the opinion polls had for once been right…

Will Marine Le Pen win the French presidential election and continue the populist revolution that started with Brexit and exploded in Donald Trump’s America last year?

Some opinion polls place the National Front leader ahead of her rivals for the first round of voting, which is scheduled for this weekend. Most polls see her at least in second place. Betting websites put the odds of a Le Pen victory in the crucial second round run-off at around 20%.

This suggests that a National Front victory cannot be ruled out. After all, even cautious observers gave Donald Trump only a 29% chance of winning the US presidential election last November; the New York Times Upshot declared the odds to be as low as 15%.

Although we agree that the a Le Pen victory remains possible in an environment of substantial uncertainty, we think Marine Le Pen’s electoral fortunes may be waning. 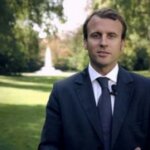 Read part II of our big data election analysis
Our data points to a possible Macron-Fillon run off. A strong showing by Jean-Luc Mélenchon remains possible. 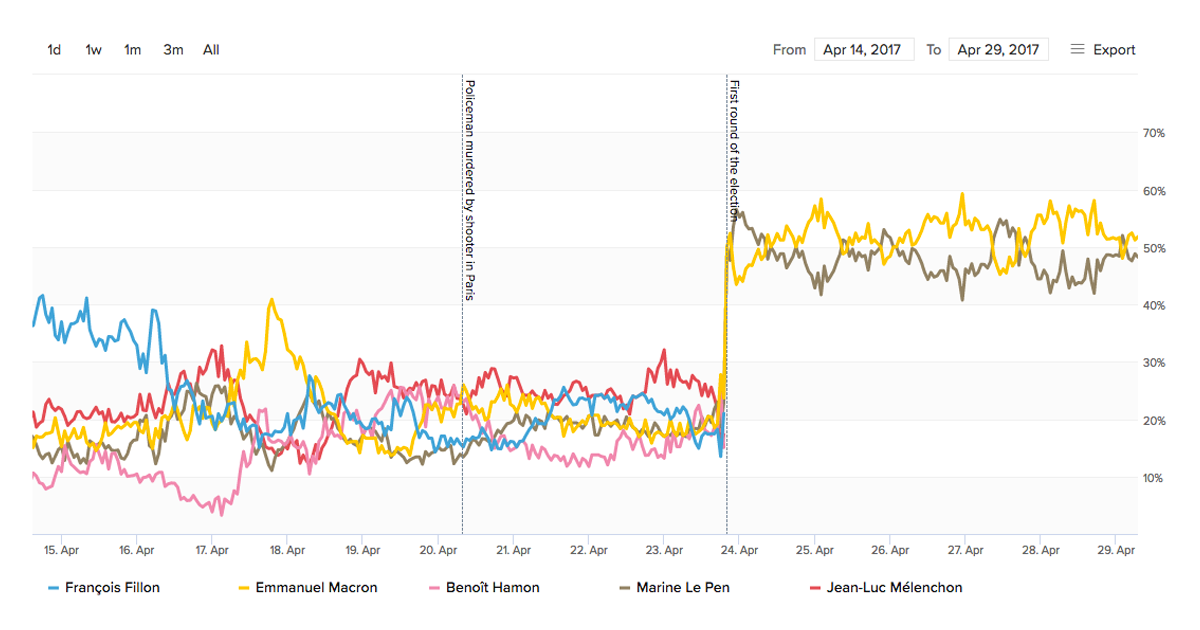 Who will be the next President of France?
The French Election Tracker shows which French presidential candidate is attracting the most interest from the electorate at any given hour.

We base our analysis, which we present below, on unique data describing the news consumption of the French public in real time and on social media trends. The French Election Tracker, which compares how much attention each candidate gets online based on billions of clicks since January, has seen the National Front leader lagging behind rivals Emmanuel Macron, François Fillon and Jean-Luc Mélenchon for some time. Moreover, the TV debates seem to have further undermined her ability to attract attention from the electorate. Together with evidence from social media, this points to a weakening of Le Pen over time, undermining her chances of reaching the run-off stage of the election.

What does big data say about Marine Le Pen?

Several metrics suggest that Marine Le Pen lags behind her three main rivals when it comes to voter interest. Her average position in our big data tracker has been fourth and she has received below-average levels of attention online for most of the time (67%) since January. She has led the ranking in our tracker on fewer occasions (9.6%) than Macron (22.0%), Mélenchon (24.8%) and Fillon (39.5%). Over the entire three months since January, Marine Le Pen scored an average score of 18.7% in our tracker, less than Mélenchon, Macron and Fillon, all of whom accrued averages above 20%.

Our tracker measures interest in a candidate, not voter support. Fillon, for example, tended to get high scores in the FET when there was a scandal involving his campaign. However, in addition to the consistently low scores for Marine Le Pen, a second main finding stands out which reinforces our view that she may not be performing as well as conventional polls suggest: She has done much worse since the TV debate in March than she did in January and February.

The impact of the TV debates

Since 20 March 2017, the day of the first TV debate featuring the five main candidates, Marine Le Pen has seen a substantial decline in interest from the public. Since the debate, the National Front’s candidate has led in our tracker only 3.4% of the time, performing worse than even Benoit Hamon. She received above-average levels of attention only 24.1% of the time since 20 March, and received an average score of 17.0%, both substantially lower than the levels seen before the debate. Meanwhile, Jean-Luc Mélenchon, whose platform overlaps with hers in many respects (e.g. scepticism towards the European Union, globalisation and international trade), has seen a surge in interest, as measured by our tracker, and in the polls.

Our data shows that the TV debates had a clear negative impact on the amount of interest Marine Le Pen receives from the French public, and data derived from social media corroborates this finding. Since the debate, Marine Le Pen has seen a substantial drop in engagement on Facebook, while Jean-Luc Mélenchon has seen a dramatic rise over the same period of time. Whereas Mélenchon’s average number of engagements after the debate was 74% higher than before the debate, Le Pen’s engagement have fallen by 7%. In absolute terms, Mélenchon’s posts have, on average, accrued 39% more engagements than Le Pen’s since the debate.

Why is Le Pen struggling?

Why is Marine Le Pen attracting such low levels of voter interest? One reason may be that she seems unable to garner media coverage and public attention through calculated provocations.

It is often said that populist candidates and campaigns deliberately court outrage and violate the norms of the democratic process in order to attract press coverage, which in turn fires up their core voters — many of whom feel distrustful of the media.

In Marine Le Pen’s case, however, this does not appear to be the case anymore. She saw large spikes in attention early on in the campaign, but not in recent weeks.

In one notable instance, when the EU Parliament decided to withdraw her immunity over allegations of mishandled campaign funds on 2 March 2017, Le Pen’s numbers hardly moved. Instead, the day’s news was dominated by Macron’s announcement of his policy platform.

Why does this matter? There is much talk of the diminished role of facts and substantive policy discussions in the age of social media and extreme political polarisation. Marine Le Pen’s performance in the French Election Tracker suggests that it would be an overstatement to argue that substance is always trumped by drama.

A second reason for Le Pen’s declining performance over time may be a general movement away from right-wing populist parties in Europe. In March, the Dutch electorate punished Le Pen’s ideological brother-in-arms, Geert Wilders, in the country’s parliamentary elections in March 2017. The UK Independence Party’s poll numbers remain in the psephological doldrums and Germany’s right-wing Alternative für Deutschland party is facing similar headwinds.

Some commentators have thus suggested that right-wing populism is no longer an unstoppable force, a contention which our data appears to support.

Together with these broader shifts and social media trends, we believe that the FET data on online news consumption points towards a low likelihood of Marine Le Pen securing one of the two top spots in the first round of the election. We therefore think that she will not be the next President of France.

Despite leading many first-round polls, Marine Le Pen appears to be losing the interest of the French public. Similar analysis of Jean-Luc Mélenchon’s performance, which we conducted last month based on the same data, indicated that the far-left candidate was doing much better than the polls suggested, and the polls eventually began to show him gaining ground.

Given recent high-profile polling misses, declining response rates and the inherent impossibility of predicting the outcome of election races when margins of error are larger than the gaps between candidates, real-time and big data-driven indicators like the French Election Tracker offer a new way to follow how election campaigns unfold. The more data becomes available, the greater their potential — until perhaps one day polls themselves become irrelevant. 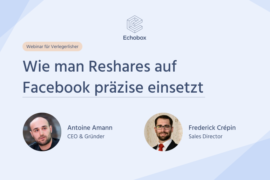 How to beat the competition 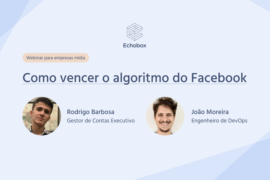